The Ascended Masters, Are Agents of The Demonic Kingdom!! by Lauren xx. 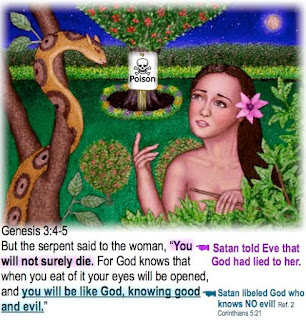 We starting off for 2016 on the topic of socalled 'Ascended Masters,' who aren't  as Ascended as they want us to belief. The whole New Age Culture has as main goal to deceive Souls away from Our Heavenly Father, aswell a secondary goal through means like various bodily energy exercises for body hijacking. The hijacking happens through opening up our Chakra points as we do in the various Yoga disciples. I know people say we feel great. That is because from moment we let a demon[ic] discarnated spirit inside through our inner Portals, it will give us some small boost of its energy, as a trade off.

The New Age and its Ascended Masters purpose is to deceive and lure Souls away from Jesus Christ, but giving the same LIE that LUCIFER told in the Garden to Eve, when he said when you eat from this Apple you will gain the knowledge Over Good and Evil, what's such a LIE, aswell that God has told you a LIE, that when you eat of this Apple you surely will die!!!

This same LIE is now purported to unsuspected New Age Follow-ers all over the planet, and also being purported in the socalled Trans-humanistic Movement. As this same movement is playing out Lucifer's Lie that we can be living like God's, by extending the human life span with centuries, what is essentially like playing for God. Humans that will fall for this gonna find out the hard way, that they living a lie. .

Our core 'Robert', was used in physical interaction and communi-cation in his spirit form with the socalled Ascended Masters, who reside in other Spiritual 'Demonic' Realms [such as in locations like Sirius A 4] and also some are under Tibet aswell. As that has some Trans Interdimensional [Multifaced] Portal exit points, into Inner Earth [for this same reason is why the Chinese were after the annexation of Tibet in the first place] and the Demonic Kingdom.